Fiesta Parade Floats has assembled a team of world-renowned design and floral technology experts with a proven track record of delivering award-winning floats for their clients. Recognized for their experience in designing and building stunning parade floats that effectively communicate a client’s brand message to millions of Rose Parade viewers, Fiesta offers complete on-site parade planning, from initial consulting and planning to the finished product.

Long acknowledged for its outstanding design and creative floral displays, the American Institute of Floral Designers (AIFD) recognized Fiesta Parade Floats in 2016 for its support of the floral industry with the prestigious Award of Merit Industry.

A well-known name in the float building industry with over 40 years experience in building floats, Tim has overseen the construction of over 500 Rose Parade floats and countless number of floats in parades throughout the United States and Canada. Tim has assembled an extremely qualified and talented team in all areas of construction, design, engineering, animation, sculpturing and decoration. A hands-on president, Tim designs the structural engineering of Fiesta’s floats and oversees the development and implementation throughout the construction and sophisticated animation stages. He is a current board member of CalFest (California / Nevada Festivals & Events Association) and a Certified Festival & Events Executive (CFEE).

A key to Fiesta’s great success for over 45 years, Jim coordinates the construction and art departments with his artistic interpretation of the float designs, determining the selection and use of floral materials. His creative work has appeared on more prize-winning floats than any other floral designer in the history of the Tournament of Roses Parade. He is greatly respected for his innovative contributions in float decoration and decoration materials. Jim is a charter member of the American Institute of Floral Design (AIFD) and the recipient of AIFD’s 1998 Award of Distinguished Service to the Floral Industry and the 2015 Award of Distinguished Service for his outstanding service to the institute. His design work is known throughout the world having won numerous world-class floral design competitions held in the United States, Europe and Asia. He is a frequent guest speaker and judge at major floral seminars, exhibits and competitions.

A second-generation float builder, Beverly has been involved in the float industry and the Tournament of Roses Parade for over 45 years. Beverly’s management positions have included that of art director, floral director, and decoration coordinator. Her many duties include acting as a liaison between FPF clients and the Tournament of Roses Association as well as working directly with flower brokers in securing and purchasing all the floral materials used by Fiesta. Beverly also manages the scheduling of float supervisors and decoration crews as well as organizes the riders, costuming and music for floats in addition to administrating special events and projects throughout the year.

For over three decades Stanley has made a career out of “Coloring and Playing Pretend” working as a scenic designer, production designer and Illustrator. As the founder and principal designer at New York City-based, Stanley A. Meyer Design LLC, his designs have earned him numerous awards and nominations including an American Theatre Wing Design Award nomination, a New York Outer Critics Circle Award nomination, a National Broadway Theatre Award nomination, a Los Angeles Ovation Award Nomination, THEA Award, and IAPPA Brass Ring Award, and numerous others. His critically acclaimed work includes the smash-hit show Disney's Beauty and the Beast, the world premiere of Elton John and Tim Rice's Aida, Peter Pan’s Neverland at Universal Studios Japan, SeaWorld’s Blue Horizons in Orlando and more. In collaborating with Fiesta Parade Floats, Meyer’s float designs have been the recipient of numerous awards, including the Princesses’ Trophy, the Animation Trophy, the Grand Marshal’s Trophy, the Governor’s Trophy, the Director’s Trophy, the Tournament Special Trophy, the Crown City Innovation Trophy, the Past President’s Trophy, the Queen’s Trophy, the President’s Trophy, the Extraordinaire Trophy and the Tournament of Roses Sweepstakes Trophy for most beautiful float in 2015 and 2017.

Claudia has been involved with the Rose Parade for over 30 years, including the past 24 as Fiesta’s art director. Her artistic experience and knowledge of flowers provides her the expertise in overseeing all artistic aspects during the float creation process. Claudia’s ability to plan and keep track of each and every facet of the design, artistic application and maintenance of the floats plays a major factor in Fiesta creating numerous prize-winning floats in exacting detail.

Each float is assigned one or two seasoned float supervisors and a veteran float-decorating crew. Float supervisors manage the final preparation of each float during Decorating Week and up until the final hours when the floats enter the parade route.

A One-Stop Shop For Participating In The Rose Parade

Services include all aspects of parade participation from conception to the big day on the parade route. Fiesta guides its clients each step of the way, coordinating logistics with the Tournament House, managing the staff and crew for float construction, decorating, and staging, arranging for media coverage, and even facilitating client parties and events. 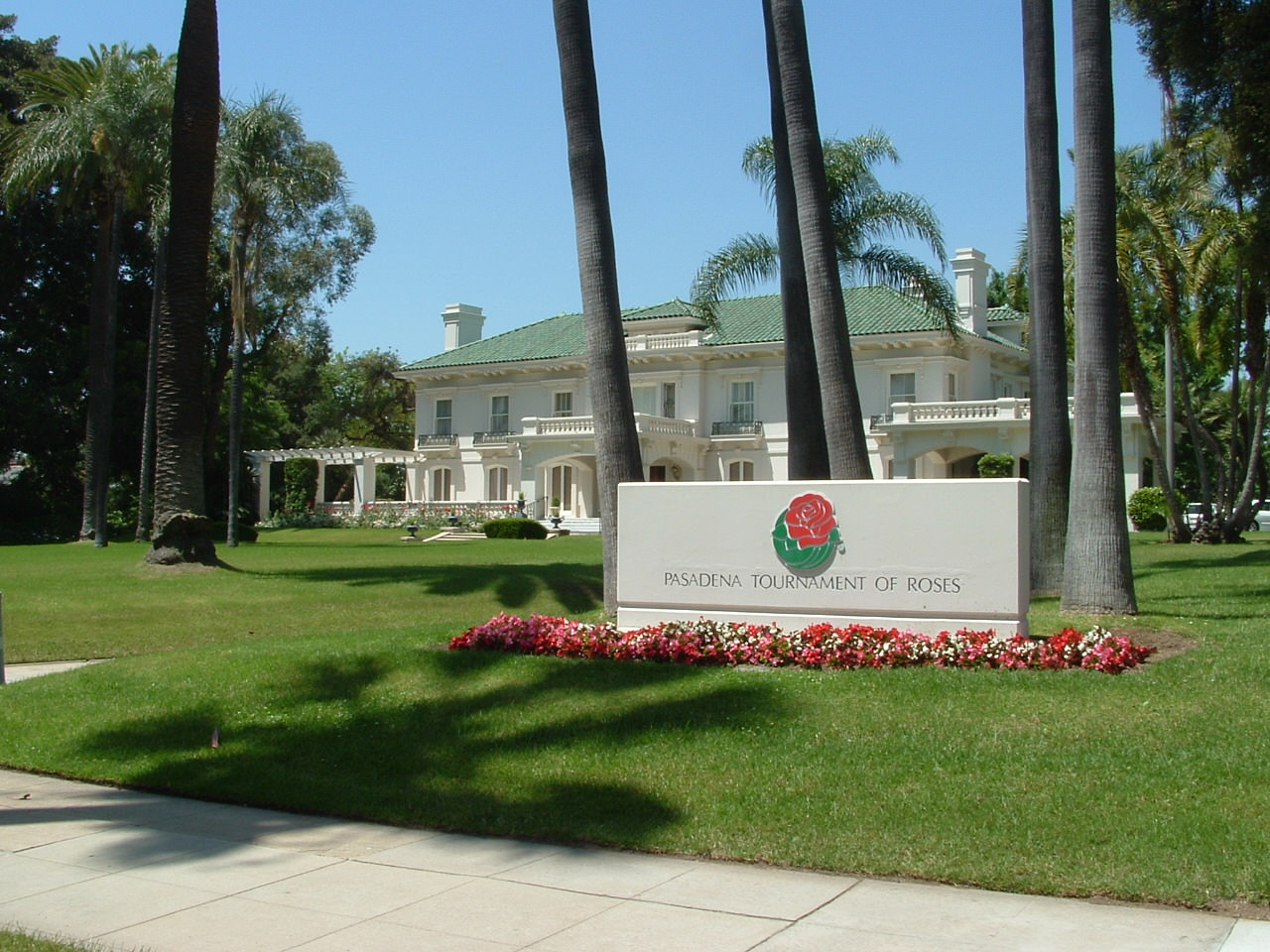 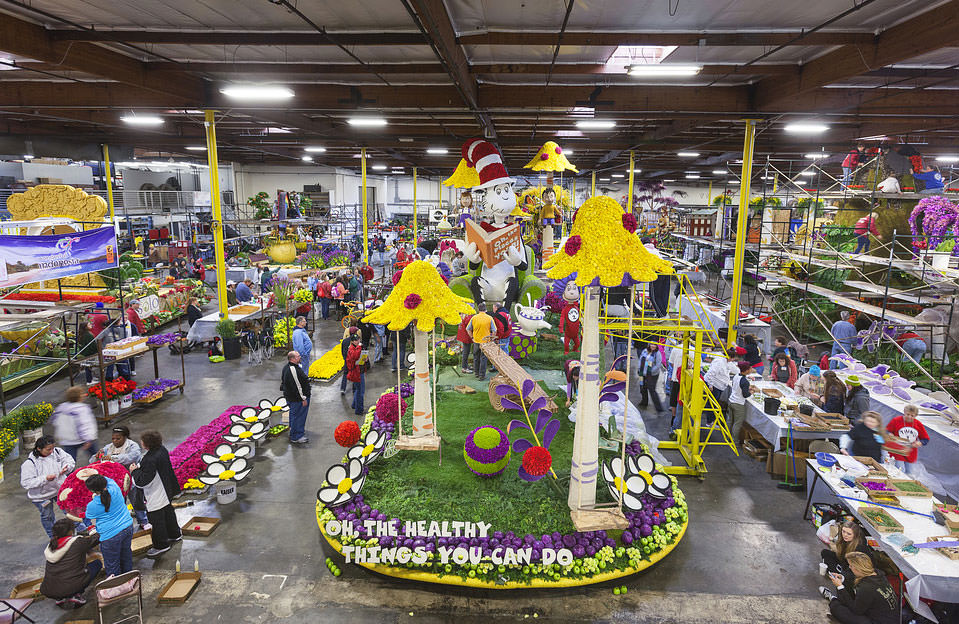 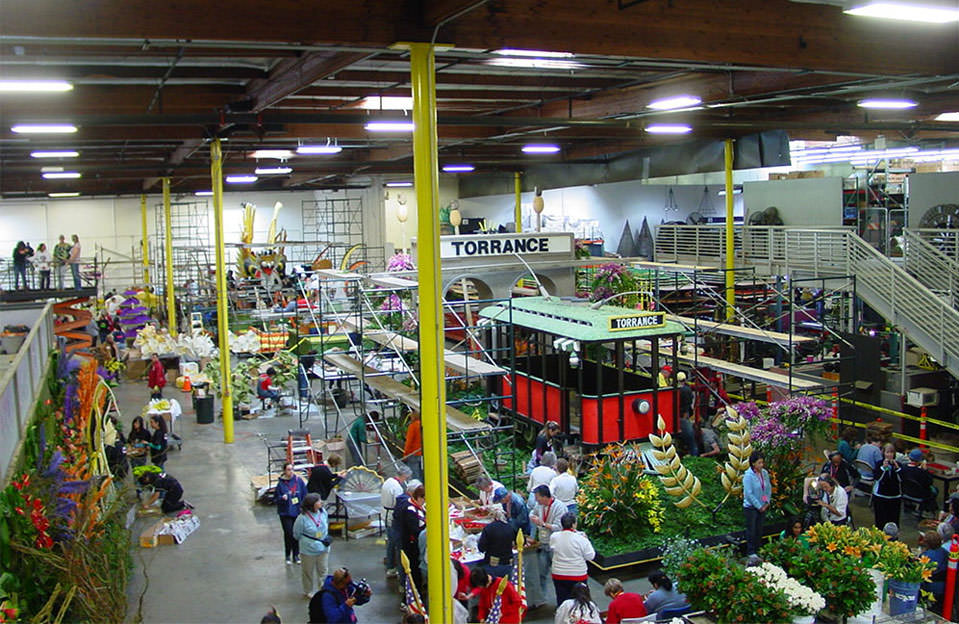 Fiesta Parade Floats operates out of a 70,000 square foot facility. Located just outside Pasadena, the facility’s capacity allows for large scale construction, engineering, and decorating. The facility is also available for client events, parties, celebrations and family days. Its close proximity to the freeway and easy access makes it an ideal target for media looking to cover Rose Parade float preparation.